Raymond Was Born in Hollywood 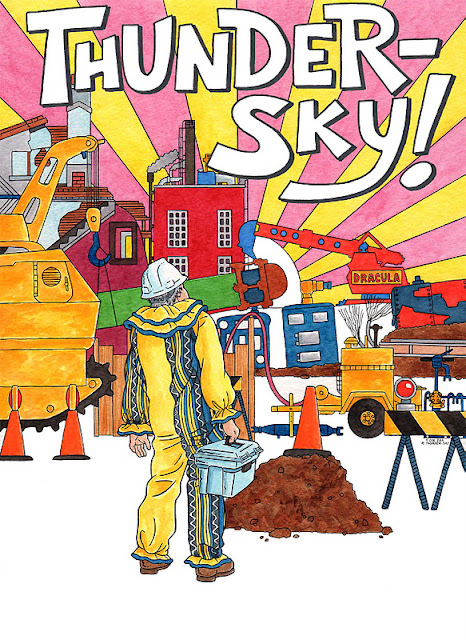 ﻿
Alfred Eaker has concocted a strange and lovingly disjointed documentary about Raymond, called simply Thunder-Sky.  Which probably is the only way to do it:  Raymond's significance really does not come from his status as an "outsider artist," as much as his unique self-created persona, his self-imposed and beautifully freaky monarchy over a universe of buildings being built and buildings being destroyed.  The drawings are simply evidence of his reign.  In other words, "art" and "life" were never fully compartmentalized in Raymond's psyche and practice; in fact he seemed hell-bent on blending them into a cement-and-cotton-candy dream-world only he could tell us about.

We screened it Thursday night at Bromwell's Gallery, asking for criticisms and corrections.  And we truly got some insightful, wonderful ways to make it better.  It was as if everyone in the room were completely invested in making sure Raymond's life story is conveyed with as much style and class as possible.

Eaker's movie is high-style at points (beautiful animation done by Todd M. Coe is kind of like the movie's "tent poles," offering a funky, psychedelic structure to the ongoing talking-heads-ness; a great ongoing motif involving the items Raymond collected in his toolboxes also helps to shape the narrative), and a little too campy in others (those weird clown vignettes really do need to go).  Sometimes the interviews get redundant (he focuses too much, I think, on Bill and me), and I think he may want to revisit having Thunder-Sky family friend Larry Higdon more in the spotlight, as his voice/demeanor/gentlemanliness as he speaks about Raymond really is arresting and actually made me cry.

No matter what though I just wanted to tell Alfred and his cohorts how much I appreciate all the work they have done.  I know I'll never completely understand all the hard work and many hours that have gone into making this movie, but I do appreciate the final result:  you've taken subject matter that is very hard to comprehend and fashioned it into a funhouse mirror world of reflection and celebration.

Thank you very much.

Raymond was born in Hollywood.  Having a movie made about his life only seems like the next step in his evolution.

"I Love This Place!" 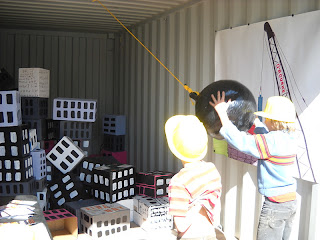 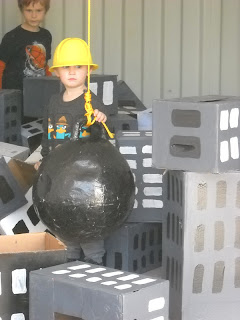 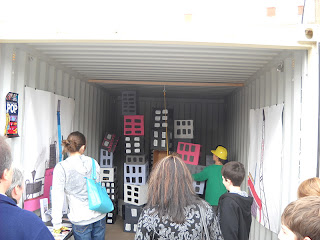 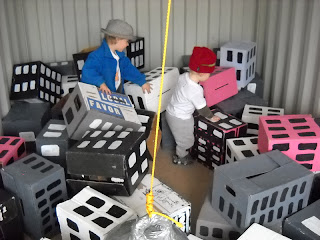 It was a great two days at the Factory Square Fine Arts Festival in Northside.  We heard over and over that our shipping container gallery was one of the best and funnest exhibits in the festival.  What we did was very simple and to the point (like Raymond's drawings).  A bunch of painted cardboard boxes representing windows and bricks could be fashioned into buildings.  We hung up a wrecking ball for people to use once they had constructed their buildings from the boxes.  Easy as pie, and somehow very satisfying.  What surprised me the most is the age range:  lots of little kids of course, but also young adults and a few older ones came by to build their own city block and destroy it.

One little boy said after flinging the paper-machie wrecking ball at his buildings and knocking them down:  "I love this place!"

It was a joy to see Raymond's spirit blooming from every "building" destroyed.  Everyone truly had a great time doing what he dreamed of doing.  A great way to introduce new people to his aesthetic universe...  Thanks to everyone who came in and destroyed their worlds...  Special thanks to Happen, Inc. who transformed one of Raymond's drawings into a beautiful public piece of art.  The whole atmosphere of the festival teemed with an industrial Thunder-Sky glow... 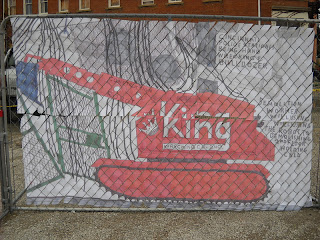 ﻿Some of the works in "Direct Contact: Self-Made Pop," opening October 22, 2011 with a reception 6 to 10 pm at Bromwell's Gallery, downtown Cincinnati. "DC" surveys aesethetic universes created from glitter, trash, and desire. These artist are self-made and use what the world has given them to make distinctively weird and eerily precise works of art. Primary inspiration for this gig: Raymond Thunder-Sky. Raymond made drawings about construction, destruction, and the blank, supernatural swirl of things coming together and falling apart. His precision mocks makeshift road signs; his vision destroys and reinvents the way you take in the normal world. 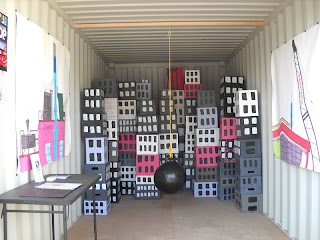 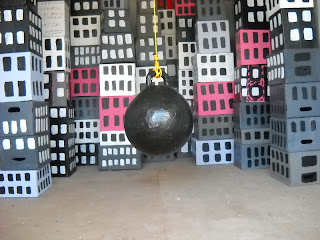 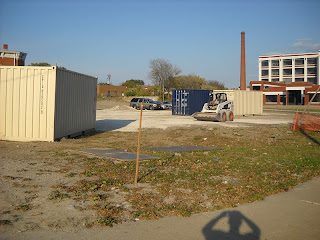 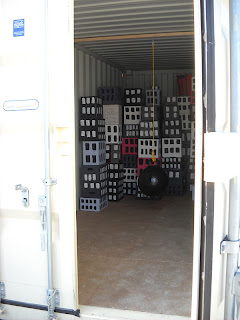 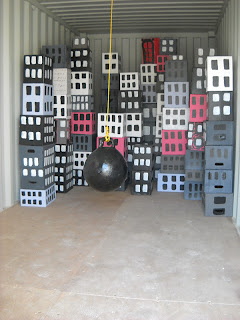 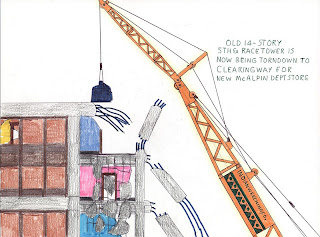 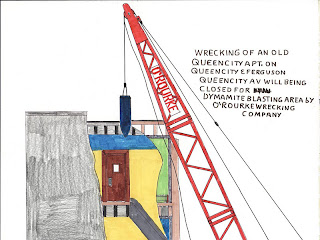 October 22 & 23, 2011 we're a part of a festival of cargo containers here in Northside.  Sound weird.  And it is.  But in a good way.  It also seems perfectly suited for Raymond and his work.  Pictured above is our container and the little exhibit we've pulled together for it:  a  paper wrecking ball and cardboard-box buildings to destroy.  People can come in and hurl the ball at the buildings.  We also have a couple large-printed Raymond drawings up as well.  The whole area around the festival is a landscape of construction (see pictures above), a beautiful tribute to a Raymond state of mind...
Posted by kbb at 8:18 PM